The word exigency almost implies a serious connotation. It’s a fancy looking 4-syllable word that google defines as “an urgent need or demand.” Under the google definition is an example of exigency used in a sentence; it reads: “women worked long hours when the exigencies of the family economy demanded it.” Furthermore, according to google, the word stems from the Latin word for enforce, which is “exigere.” It might seem hard to believe that this word, with a serious sounding definition, example, and origin, could be applied to a blog that posts images like the following: 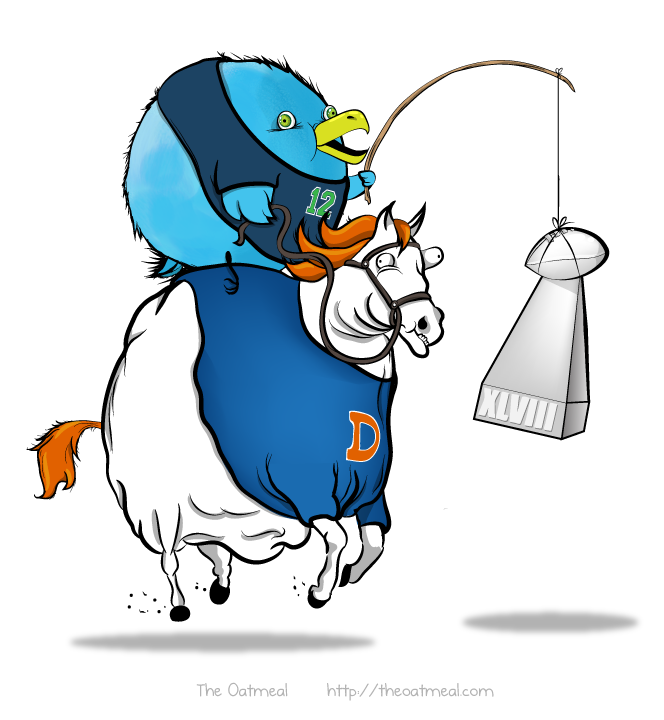 The above image is an illustration of the last Super Bowl between the Denver Broncos and the Seattle Seahawks, posted on The Oatmeal. The Oatmeal is a blog that posts many single images like these, as well as full-blown comics like My Dog: The Paradox that often go viral on the internet. Many comics have an underlying theme that is meant to inspire, like this comic on how the blog’s author motivates himself to run regularly. Other comics, like Cat vs. Internet, cover more silly, light-hearted topics. Therefore, the exigence is some comics could be argued as more serious and meaningful than the exigence in others; this is evident when comparing the running comic to the cat comic. However, throughout all of the Oatmeal’s comics, pictures, and blog posts, there usually exists an element of humor that I also believe represents exigence. While getting people to laugh at silly jokes on the internet might seem like a frivolous pursuit, The Oatmeal truly helps me wind down from a stressful day. Little bits of non-nonsensical humor brighten up my day and help me keep a level head among the serious issues of day-to-day life. My dad might argue that looking at comics of cats on the internet is a 100% waste of time, but in my opinion sometimes stupid humor is just what I need to get through the day. I imagine this applies to other readers of The Oatmeal as well, and therefore represents a true source of exigence. The Oatmeal’s humor might not seem like “an urgent need or demand” when compared to a social justice or humanitarian blog, but in my opinion this humor still represents meaningful exigence. To many readers like myself, this humor is not only something I read to stay sane, but it also represents a part of my identity. The sarcastic, snarky humor of The Oatmeal reminds me of myself, and provides me with quick-to-digest entertainment to alleviate my often stressful college life. In this way, the exigence behind The Oatmeal is the need to provide entertainment to those who demand it, and I believe this shouldn’t be looked down upon when compared to more serious examples of exigence. If you think you could add a couple chuckles to your day by digesting The Oatmeal’s unique style of humor, then you should undoubtedly follow The Oatmeal’s Blog, if only to browse for a few minutes a day.

One thought to “The Oatmeal: Why you should follow it”