After meeting with Shelley last Thursday, my repurposing project now has a clear, solid direction and purpose behind it.  Instead of vaguely arguing something about marching band, now I know exactly what I’m arguing.  Back in January, sports reported Jim Rome posted the following Tweet. 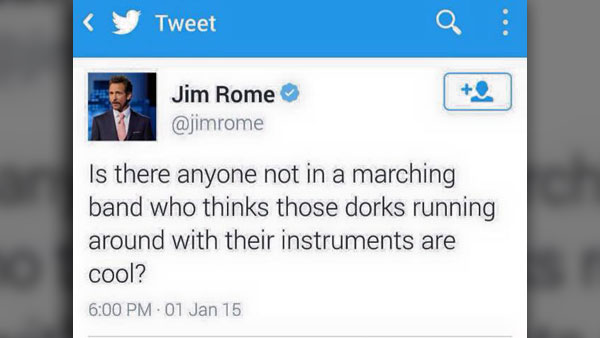 I (along with a large number of others) was extremely offended by this for obvious reasons.  So my new project is a response to him and others who have the same viewpoints as him- that marching band is just for dorks or nerds who “run around” with instruments all day.  I want to let them know that marching band is more than that and that people who participate in marching band are not dorks or nerds.  Instead, they are performers, artists, and athletes (which are the three words I’m going to base my argument around).  My new plan is for this to end up being a blog post with links and tweets and videos, trying to use these modes to further my argument instead of simply using words (although there will be plenty of words too).

So, yeah, that’s where I’m headed right now.  It’s taking me a little while to get it done, since I’m pretty much starting over, but now that I have a direction, the writing process is going pretty smoothly.