After writing my first draft of my evolution essay, I came across two contradicting ideas that I was unable to convey in my draft. I wanted to make each of these claims, but there was evidence from separate papers that served as counterarguments for each of the arguments I wanted to make.

As I began reflecting on my previous writing I began to feel that my past assignments that did not have a strict rubric lead to me writing more creative and authentic pieces. This was especially true in my writing for the Gateway course and with my writing in English 325. Despite wanting to make this claim, when I reflected on my earlier writing I found that the opposite held true.

With my DSP essay and my writing from my first-year writing requirement, I also had some autonomy in my writing. In both of these scenarios, I was presented with vague prompts, but the writing I came up with was not creative or authentic. In these cases, not having a strict rubric led to me putting less effort in my writing, and the writing itself suffered.

I haven’t decided if it’s important for me to include these claims in the direction of my writer’s evolution essay, but perhaps there was something that led to this change my writing. I took both the Gateway course and English 325 during my junior year and the earlier courses were from my freshman year. Perhaps something occurred in my writing during those two years, but I have yet to determine a possible solution.

It’s hard to believe that the end of the semester is upon us. It feels like yesterday that the Fall 2014 cohort was gathering to meet each other and just last night we were already getting together for the final time this semester. I am going to miss T and my classmates, but I know we will all keep in touch!

Looking back on the semester and at everyone’s work from the Gateway course truly makes me proud at what everyone has accomplished. I am very pleased with the progress I made this semester, but I know there’s even more to come. For the time being though, I am very pleased to present my ePortfolio from Writing 220, which can be found here.

Thank you all for a wonderful semester!

I don’t necessarily feel qualified to provide advice to future Minor in Writing cohorts, but if you’re taking the time to read this I’m going to provide my two cents. If you’ve ever had an interesting thought or idea and thought about pursuing it in a piece of writing, go for it. The gateway course provides one of the most unique aspects of any course at the University of Michigan due to the fact that it provides you with the flexibility and freedom to tackle your projects in the way that you want. No idea is stupid or silly and if you really go for it you can turn anything into something special in the MIW program. We are generally trained throughout our time in school to focus on specific academic essays and literary analysis papers, so it can be challenging to come up with something fun and interesting to start with. I encourage everyone to take the time to take a risk and go for something you wouldn’t normally do, or to simply pick a topic you are incredibly interested in. Not only is it more enjoyable to choose what you are going to spend your time writing about, but I truly believe that this process in instrumental in helping you find your voice. It’s hard to break habits and try something new, but give it a shot. I had the opportunity to see a lot of amazing projects as a result and I know there’s plenty more in store for our instructors in the future. However, if you plan to top the Fall 2014 Cohort, you’re really going to have to go for it. I wish you all the best of luck and enjoy the ride while it lasts.

Throughout my short time in the Sweetland Minor in Writing program, I’ve discovered that while I’ve always struggled to get a piece of writing started I’m certainly not alone. Being surrounded by some of the best writers around our campus has been a wonderful experience for numerous reasons, but I think the best aspect for me so far has been realizing that even the best of writers struggle sometimes. It’s not easy to simply sit down and write an essay, or even an interesting idea. It takes consistent effort and revision in nearly every case, even for a group of talented writers. I feel comfort in knowing this because I’ve always believed that the opposite held true. For whatever reason, writing seems to be one of the few lines of work where even if you have all of the natural talent in the world, you still have to put in a lot of hard work in order to achieve success. For anyone out there who is reading this: if you find yourself struggling to get a good start on your writing, or if it’s not coming along, you’re most certainly not alone. However, from the looks of these posts and the work I have seen from members of my class, this is quite the talented group. Push on and keep at it, we’ll all be all right.

As another semester winds down, I find myself reflecting on all of the great things that have occurred over the past few months. While the end of the semester can feel like a breath of fresh air after numerous long nights and a lot of hard work, it’s hard for me to see this semester end as a result of how much I’ve enjoyed this class. I am grateful for T, who has been an amazing and incredibly helpful instructor all semester. I am also grateful for my peers in the Fall 2014 cohort for helping me develop my skills as a writer and for making each class fun along the way. It’s been a great opportunity to get to know a small group of people on an individual level and to see everyone’s voices to continue to grow and pop out of the page. I am hopeful that some member of our class can reconvene for the capstone course, but even if that’s not possible I’m glad I had the opportunity to learn and grow as a writer with you all. My thanks go out to all of you for a fantastic semester!

I get it. These words are similar and for that reason they could be easy to confuse. Let’s be honest though, generally speaking, one is a noun and the other is a verb. Affect and effect simply shouldn’t be confused as often as they are.  Fortunately, this grammar mistake tends to be somewhat rare because it really irks me every time I see it. Unfortunately, my efforts to correct individuals who mix up these words have been futile. I am hoping to change that with the help of the visual aids below. Please do me a favor and show this to someone who needs this and I will be eternally grateful. 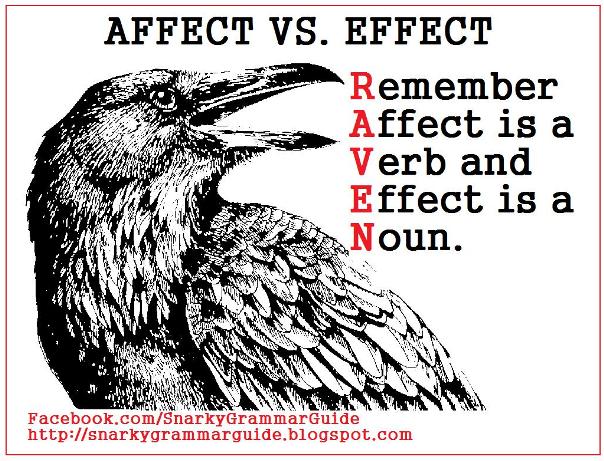 When I discuss writing with others, particularly people who feel as though their writing isn’t strong, I tell them that the best way to improve is to simply sit down and write about the things that come to mind. Every so often throughout the day I will think of something that sparks my interest. It can be a funny thought, a simple idea, or something completely ridiculous and I know I should write it down, but I don’t. I’ve never considered the possibility that one of these brief moments could lead to larger idea or story, but every piece of writing starts somewhere, right? Instead of taking a few minutes out of my day to document these thoughts, I’ve effectively thrown away thousands of starting points for the next great story and the opportunity to become a better writer at the same time. I don’t practice what I preach and I really should. While I’ve already missed numerous opportunities to find the idea for the next great story, I don’t have to waste them moving forward. I will practice what I preach.

Writing is so much more than an academic requirement

It has the ability to inspire & transcend time

Writing is NOT pointless

It is challenging but that makes it rewarding

We write to express ourselves and our ideas

To teach others and explore new worlds

Writing is our light

Without it we are lost

In my preliminary research for project two, I discovered an article from NBC Sports that discusses a lot of the information I was hoping to find. The article is called “Baseball is dying? Nonsense: The Case for Baseball’s Vitality” by Craig Calcaterra. I stumbled upon the article while I was searching for information about baseball’s popularity in comparison to football because my initial piece of writing was a form of comparative analysis between these two sports. This article helped me understand a major problem with some of the research I could encounter, which is simply that statistics regarding baseball’s popularity have commonly been used to make it look like baseball is significantly declining in popularity. As a result, it is very easy to make it look like football is constantly growing in popularity while baseball crumbles, but it is not quite that simple.

For example, the World Series used to receive a Nielsen rating (a measure of how many viewers watched on TV) around 30 nationally in the 1970s and 1980s. However, game 2 of the 2013 World Series between the Red Sox and Cardinals received a 7.3. These numbers certainly make it look like a simple argument, but perhaps this isn’t the best way to evaluate baseball’s popularity. The article goes on to show that baseball is truly a local game and while the 2013 World Series featured very low TV ratings nationally, in Boston and St. Louis, the Nielsen ratings for the game were 32.4 and a 37.2 respectively. With a subtle change in the approach of how we analyze baseball’s popularity, it suddenly looks like baseball is just as popular as ever, but in a different capacity.

Unfortunately, it seems that statistics can be made to fit both sides of this argument, which is going to prove to be a challenge for me with this project. However, I am excited to continue to dive further into my research to learn more about the current state of baseball.

The NBC Sports article can be found here.

For our second project I have decided to revisit a paper I wrote for a political science class I took during my freshman year at the university. The class focused on the sports, politics, and society. The paper I am interested in working with discussed the idea that while most people perceive baseball as a pre-modern sport and football as a modern sport, there are many components of each sport that support the exact opposite conclusion. Using this as a starting point, I would like to take the argument a step further. While baseball is seen as a pre-modern sport, it is also frequently said to be declining in popularity, even to the point of no longer being America’s pastime. While this is a subjective statement, I want to research whether or not it has any validity and see what the primary causes are for this type of thinking. As a huge baseball and football fan I am excited at the thought of pursuing this and I think it would be a unique opportunity to do so.

Another piece of writing I considered working with was an academic essay about underlying causes of the 2008 financial crisis. However, as an economics major, I have ample opportunities to explore this idea and I feel as though I would get bored in the process of developing this idea.